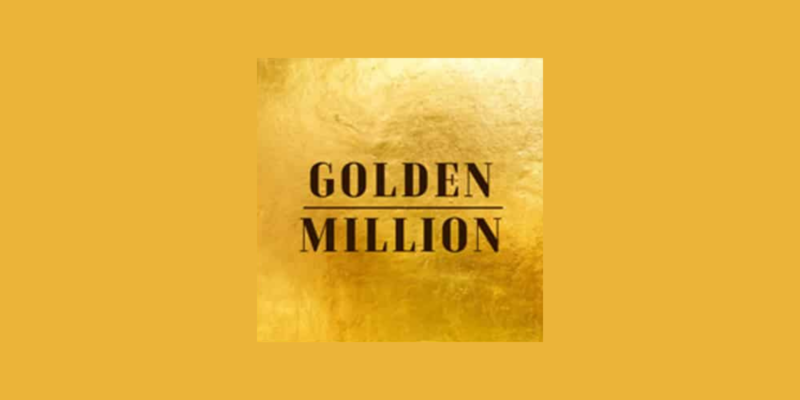 Golden Million is an expert advisor sold by Aleksei Bordark, a Russian developer on MQL5. This person is a professional algorithm developer for Forex, crypto, and other financial markets. Aleksei has  more than 15 years of experience in programming and finance. By trading options on Gold, he earned their first million dollars, learning several patterns which they have implemented in this EA.

Unfortunately, this seller has a poor rating of 2.6 out of 5 on MQL5, and we have no way to verify his trading experience. The robot was launched on November 15, 2021, so it is a relatively new system. Apart from Golden Million, this developer has another robot called NewMillion.

The vendor recommends loading the EA on H1 charts. It is also recommended that you use a hedging account while conducting trades using this robot. The minimum required leverage for this EA is 1:100.

On the MQL5 product page, the vendor has not clearly explained how the EA works. We don’t know if it has a special installation process and there is no list of features. As such, it is difficult to compare it with other systems based on what it offers.

This is a robot that only trades in XAU/USD or Gold. The developer has not provided an explanation for the trading strategy used by the EA. We don’t know whether it trades with the trend or against it, or how it identifies profitable trading opportunities. There is no list of indicators and it is not clear whether the EA is suitable for long-term or short-term traders. This makes it difficult for us to gauge the profitability of the system. 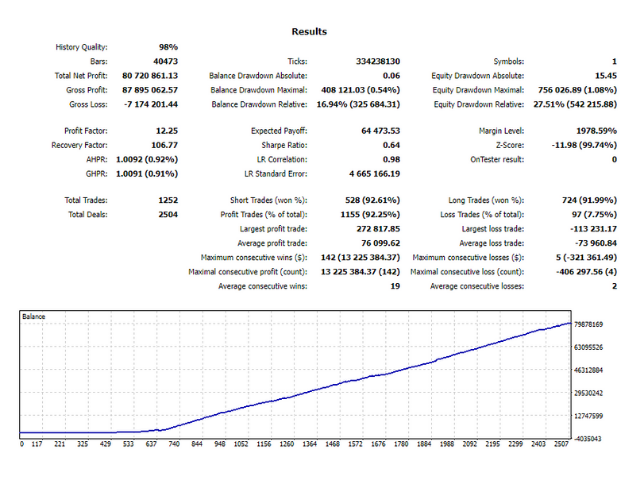 Here we have the results of a backtest conducted on Golden Million. We don’t know for how long the test was conducted, which is an important factor to determine the system’s ability to deal with different market conditions.

The EA used an initial deposit of $1000 to conduct 1252 trades, winning 92.25% of them and generating a total profit of $80720861.13. Compared to other EAs, the win rate was extremely high. Also, the profit factor was quite impressive at 12.25. The relative equity drawdown was a bit high at 27.51%, and this tells us that the EA was following a risky trading strategy. There were 142 maximum consecutive wins and 5 maximum consecutive losses for the testing period.

Trading statistics are vital when it comes to gauging the performance of a robot. They reveal important performance parameters like win rate, drawdown, Sharpe ratio, profit factor, etc. We can also analyze the recent trading history to figure out the trading style of the EA.

Unfortunately, the vendor has not shared the trading results on third-party websites like Myfxbook, FXBlue, or FXStat. Usually, vendors on MQL5 share live monitoring accounts for their EAs on the website itself, but even that is not available for Golden Million. Therefore, we have no way of finding out whether it is capable of generating steady profits in real-time.

The current price of this expert advisor is $599, which is pretty standard compared to the market average. You also have the option of renting the robot for a year in exchange for $499. The vendor offers a free demo version for testing purposes, but there is no money-back guarantee.

What else you should know about Golden Million

There are no customer reviews for this expert advisor on websites like Myfxbook, Quora, Forex Peace Army, and Trustpilot. On the MQL5 product page, there are a few reviews where users have praised the performance of the EA. However, we have no way of verifying their authenticity.

There is no dedicated customer support team for this robot. On the developer’s profile, there is no contact information. The only way you can get in touch with the developer is by messaging them via MQL5. Thus, it is not possible for users to get quick support for any issues they might face with the system.

Golden Million is an automated trading system that has no verified track record of winning profits in the live market. The vendor has only shared the backtesting results for the EA, but it is not possible to gauge the live performance by looking at historical data only. There is no money-back guarantee for the robot and we don’t have any reviews that tell us about the experience of first-hand users.

FX Parabol Review: Is it a Reliable System?